Reclusive and nocturnal, bobcats are medium-sized felines sometimes called wildcats. The name bobcat derives from the animal's relatively short tail that appears cut or "bobbed." While they naturally occur in nearly every climate across the continental United States, bobcats have also begun to appear in suburban settings. They are carnivorous and hunt and eat rodents, rabbits, birds, small deer, and reptiles. 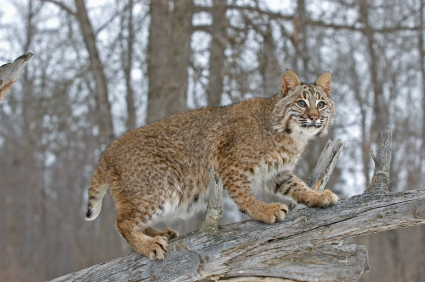 Weighing up to 35 pounds and growing approximately three feet lengthwise, bobcats are about double the size of an average housecat. They can be various shades of tan or brown and have darker spots or stripes on their bodies. Other prominent features include short tails tipped in black, large feet, long legs, and hair on either side of their heads that are similar in appearance to human sideburns.

Bobcats can be found in various regions of the United States. They are highly adaptable animals and live in forested areas in the north, deserts in the west, and marshlands in the south. Typically solitary animals, bobcats sleep in hidden dens such as hollowed or fallen trees, brush and thickets, or in rocky fissures. As they are generally nocturnal animals, bobcat sightings are quite uncommon.

Are bobcats known to enter homes or yards?
Extremely territorial animals, bobcats typically only venture onto private property if residences appear within their native range. Additionally, yards featuring abundant prey, shelter, and access to water attract the large cat. Bobcats most likely wouldn't enter homes unless confused or trapped involuntarily. Since they are particularly shy, bobcats will not attack unless cornered and usually run away instead of engaging with humans.

Do bobcats harm people or property?
Bobcats were once believed to kill large amounts of livestock and hunted to near extermination in several areas. While they usually prefer to capture prey in the wild, bobcats will occasionally target animals in captivity, like small pets or chickens. Still, these attacks tend to occur when other food sources are not available or if bobcats have especially easy access to domesticated animals and livestock. Bobcats rarely kill out of aggression.

Property owners can employ exclusion methods to reduce the possibility of bobcats wandering onto yards. Erecting fences can be helpful, but bobcats are excellent jumpers. If they are truly motivated or enticed, bobcats can easily scale fences of considerable height. Keep pets and pet food inside the home or in secured, covered coops to discourage bobcat interaction. If a bobcat gets aggressive with little prompting and seems ready to attack, it could have rabies or be protecting nearby young.

Attempting to trap and remove bobcats without professional assistance can be dangerous. Contacting a trained wildlife professional ensures that both the people and animals involved remain safe. Critter Control specialists have the knowledge, tools, and experience to remove bobcats safely and humanely.

We can help you get rid of bobcat problems.